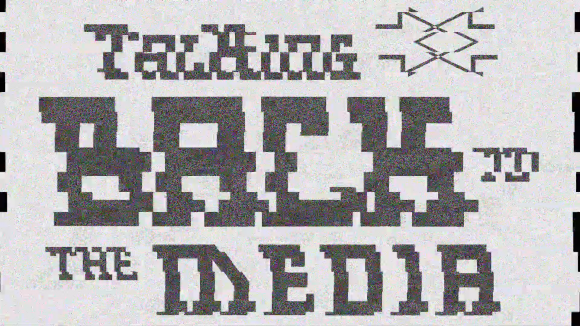 November 1985-2015: Thirty Years Since Artists Talking Back to the Media

Thirty years ago this month, Amsterdam hosted a festival of international significance to media art, bringing the whole scope of electronic and mass media into conversation and commissioning the production of some important works of pastiche and found-footage. In an effort to poke fun at (and have fun with) the increasingly dominant presence of television, radio, magazines and the like, the event featured artists’ reflections on these mediums. Importantly, the "talking back" was done using not only with mass media's language but also using mass media channels. One year prior to the festival, the artists group Artists Talking Back to the Media was formed, following in the collaborative spirit of early Amsterdam media art community, built around sharing video equipment and studio locations. Described in archival documents collected by LIMA and de Appel in 2014, Artists Talking Back to the Media:

With these goals in mind, the group put on a festival of the same name, which after many months of planning, began on the first of November 1985. Its eclectic programme engaged media as its singular subject, but avoided centralizing any specific medium.

Throughout that month, Amsterdam’s streets, airwaves, and artist spaces were bombarded with the festival’s content. The prominent visual artists who planned the event had strong local and international ties: Raul Marroquin, David Garcia, Rob Perée, Max Bruinsma, Ulises Carrion, Aart van Barneveld, Sabrina Kamstra, and Sebastian Lopez served as the festival’s main organizers. Video programmes were hosted in the evenings at Time Based Arts (then located on the Bloemgracht); a week-long series of film screenings took place at Kriterion; and the Shaffy Theatre (now Felix Meritis) staged a play titled “The Wooden Sword.” Public spaces also became sites for "Talking Back": Barbara Kruger, Richard Prince, and Jenny Holzer produced posters for the event, which were then printed off en masse and plastered around Amsterdam, alongside everyday public notices and advertisements. Over the airwaves, VPRO Radio broadcast two shows of sound art curated by Ulises Carrion (recordings of which have not been found). The then-new cable TV service Kabel Televisie Amsterdam (KTA) aired four hour-long programmes of video works and interviews, something that would not have been possible over traditional airwaves. Already, the social and technological transformations leading to the decentralization of mass media were underway. More recent (now widespread) trends of appropriation and remixing were celebrated in works shown at Talking Back to the Media.

Much of the content from the festival programmes is cared for as part of LIMA’s collection (see a selection of these works on the left). In the thirty years since the festival, the tapes and recordings have been preserved and made accessible for research, and many works remain in distribution by LIMA. Indeed, in partnership with local and international institutions, LIMA is in plans to revisit the issues Artists Talking Back to the Media raised in an exhibition and public programme, featuring presentations of works from the archive along with works by contemporary artists like Constant Dullaart, Douwe Dijkstra (image) and JODI.