CCTV TV: An evening with CAMP 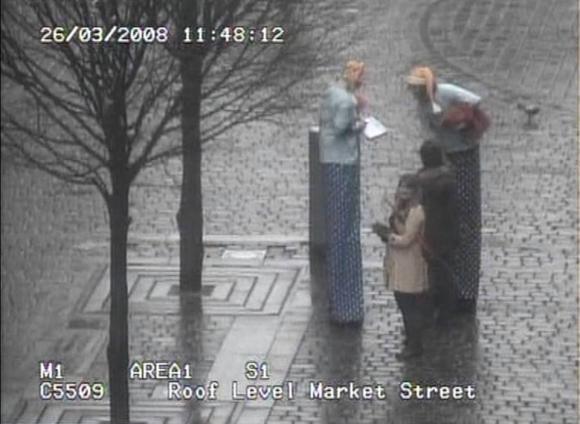 Mumbai-based interdisciplinary studio CAMP’s latest commission, In Cameras Res, is a dark city-symphony shot with state of the art surveillance equipment from atop some of Amsterdam’s iconic buildings. In advance of the installation’s 16 March opening at De Appel, artists Shaina Anand and Ashok Sukumaran present two of the studio’s earlier acclaimed projects that examine surveillance, society, and cinematic apparatus, followed by a discussion with curator Rachael Rakes and an audience Q&A.

"The CCTV control room of the new Arndale Centre has full coverage of the mall's thoroughfares. Manchester was the first industrial city in the world, the city where Engels wrote The Condition of the Working Class in England. The mall in this historic city-center was the site of an IRA bombing in 1996, the largest on U.K. soil, and its rebuilding (to create the largest mall in Europe) was the start of Manchester city's regeneration program. A man walks through these now indoor 'market' streets, getting almost 100 members of the public to sign ‘image-release’ forms, which combines provisions from the U.K. Data Protection Act with the usual filming permissions. Through this we get access to the surveillance feeds from the mall’s camera network, and its methods of real-time videography, visible in Capital Circus" (CAMP)

The Neighbour Before the House (Al Jaar Qabla Al Daar)
2011, 60 min, Arabic, English.
“The Neighbour before the House is a series of video probes into the landscape of East Jerusalem. Shot with a PTZ (Pan, Tilt, Zoom) security camera, these images show that before and after  instrumental "surveillance", there is inquisitiveness, jest, memory, desire and doubt that pervades the project of watching. In these specific times and places, camera movements and live commentary become ways in which Palestinian residents evaluate what can be seen, and speak about the nature of their distance from others.” (CAMP)

About CAMP
CAMP is a Mumbai-based studio for transdisciplinary media practices, co-founded by Shaina Anand and Ashok Sukumaran. CAMP's work engages with the overlapping history and politics of technology, social forms, and image making. Their work has been exhibited internationally, including at the 2010 Liverpool Biennial, the 2009 and 2011 Sharjah Biennials, the 2012 New Museum Triennial, Documenta 13 in Kassel and Kabul, the 2013 edition of the Viennale, the 2014 edition of the Shanghai Biennale, the Keimena project at Documenta 14, and the 2017 edition of the Skulptur Projekte Münster.

The exhibition In Cameras Res runs from 16 March – 23 April at De Appel.
http://deappel.nl/en/events/cctvtv-an-evening-with-camp