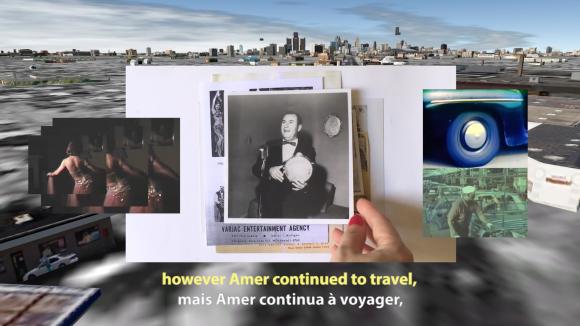 Foundland Collective (Lauren Alexander and Ghalia Elsrakbi) - The New World, Episode One (2018)
A melancholy song, full of hope and longing, reverberates in The New World, guiding us through the lives of Lebanese immigrants Amer and Sana Khaddaj. Ghalia Elsrakbi and Lauren Alexander use archival material to collect stories of ordinary people of Middle Eastern descent, bringing us a fresh look at what it means to be displaced. The New World series evokes the history of the first waves of Arab immigrants to the United States, beginning in the 1880s, through elements drawn from the archives of the Faris and Yamna Naff Arab American Collection at the Smithsonian's National Museum of American History in Washington DC. The first episode of The New World, originally presented as an installation at Centre Pompidou (2017) incorporates a map and a video narrating the travels of Amer and Sana Khaddaj, Lebanese musicians who migrated to the United States in 1947.

Michiel van Bakel - Forest Paths (2018)
A warped stroll through a forest. Animated still photographs reveal movement and light on the forest paths that are otherwise invisible to the human eye. Van Bakel made a ‘scanner-camera’ that extends human vision to near-infrared light in an otherworldly way. What’s this thing called vision? What’s the fundamental difference between what a robot discerns, what a flying insect detects or man’s observation?

PolakVanBekkum - Gaan Om Te Zijn / Go Move Be (2018)
A city under construction, buildings reduced to a fragile aluminum frame and made flexible, trees folded from paper and cars made of clay. The film Go Move Be (Gaan om te Zijn) intersects between a digitally constructed simulation and a cardboard reality. Cameras in that world, the eyes through which we as spectators see, imitate the mechanical movements of CCTV, the flowing movements of drone cameras and the uncontrolled movements of a computerized eye restlessly looking for the protagonist. Voices utter impressions about those movements, about distance, memories, a future. Their mutual intonation suggests a shared interest, but there seems to lack conscious exchange. The words hint at a structure that almost becomes solid.

Zeno van den Broek - Paranon (audiovisual performance)
Zeno van den Broek will do a live audiovisual performance of his new Paranon album. Paranon consists of two compositions based on parameter canons of sine wave generators. The canon is a counterpoint-based compositional technique that creates one or more imitations of a musical movement after a given duration. These imitations replicate the initial movement with transformations of parameters. The custom programmed sine wave generators Zeno van den Broek uses on Paranon make it possible to generate interference, shift phases and alternate frequencies with great precision. The method of the canon creates tension and unexpected, yet cherished, results between the initial sine wave and the imitations that follow. These two concise compositions delve into the beauty of pure sound and explore the richness of colliding sound waves that create spatial events wherever Paranon is being listened to.