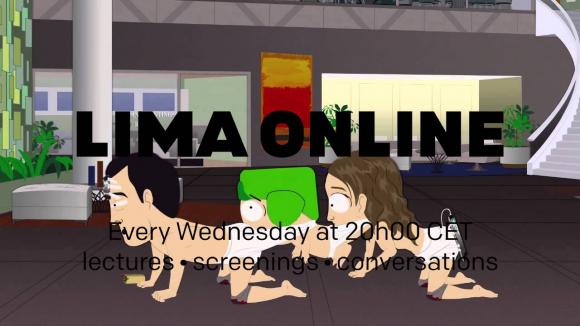 This program is part of the LIMA Online series that takes place every Wednesday at 20h00 CET. More information: bit.ly/LIMAOnlineprogram

Political philosopher Daniel de Zeeuw (UvA) and Media theorist Willem van Weelden (Rietveld Academie) will reflect in their talk on the questions of what it means to be online and who are we when we are online? Are we a sovereign performer on the web, or are we performed by the web?

de Zeeuw and van Weelden will illucidate their remarks on these issues with stuff they found online; sometimes instructive or downright hilarious, sometimes way beyond the carnavalesque. They will look at the human centipede as a conceptual persona that operates as a diagram for contemporary systems of machinic enslavement that feed on a desire to become multitudinal, but in a nightmarish sense: the multitude forced to eat its own shit, transposing Hardt and Negri's love into hate.

Who’s afraid of the centipede?
Machines, assemblages, networks: serial and centipedal structures of immersion and enunciation of different kinds. They are the totalities we have recognized to be an instrinsic part of, yet, we also know that they are only peripheral. ‘Being part of a whole’ remains an emergent emergency: What traverses you traverses me, I’m acted. As the passionless process of becoming immanent sucks us into its tautological void, the world derealizes itself; something that can only be grasped pataphysically. Brian Massumi describes this impersonal process as 'a doing done through me’.

When we scroll down the rabbit holes of the deep web we enter the state of anonymous condividuality that incites as much horror as it promises self-oblivion: we stare into the abyss of paranoia as play.

'You see the things that were inside you. this is the womb. the original site of the imagination.
You do not move your eyes from the screen. You have become invisible.
The images captivate you. But still you drift off.
You can still see every detail clearly. But you can’t grasp the meaning.'