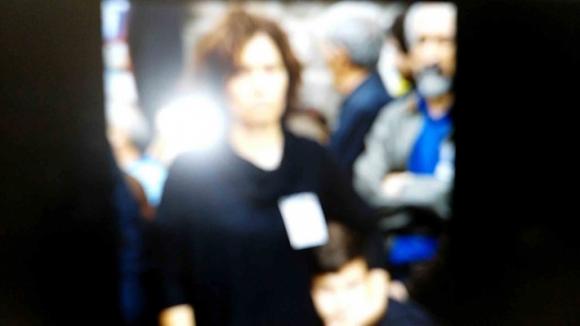 These four recent works by belit sağ, Morgan Knibbe, Margaret Salmon and Moyra Davey take on apparently immovable subjects and historical norms, inflecting them with feminist and feminising perspectives and methodologies. Notice within the four works how the height and movements of the person holding the camera are subconsciously inscribed in the presence of the image. Or the way the voiceover travels in front of the camera, as well as beyond the limits of the frame, grounding it in space as well as time. Through belit sağ’s and Morgan Knibbe’s works respectively, the practice of sharing trauma lifts its victims out of isolation separating their experience from the spectacle of war and death. Moyra Davey’s vividly recalled memories paired with close readings of her mentors’ writing and photography delivered as a semi-broken narration over incidental imagery of her domestic environment, offers the viewer unexpected gaps in-between the layers and the stillness of her home in which to create their own associations. In the process this seemingly solitary faltering voice implicitly articulates her own canon of friends, artists and motivations. Is, as the poetic voiceover in Margaret Salmon’s Mm, filmed at a motor speedway in the North of England, asks, “Minus Man Minus Meaning?” or an unquantified generosity?

The final Non-linear screening will take place at LIMA at 7pm on Tuesday 12 June.

belit sağ my camera seems to recognize people, 2015 (TR/NL), video with sound, 3 minutes
What does it mean to look at death and the wounded through the lens of a camera? This video questions victimhood, and how images create and re-create these positions, and what are the potentials for [other] images to change them. The work concentrates on the power of images in mediating history and memory. – belit sağ

belit sağ is a videomaker based in Amsterdam. She studied Mathematics in Ankara, before moving to the Netherlands and enrolling in the Gerrit Rietveld Academy. She has been involved with a number of activist collectives in Turkey and has been an artist in residence at the Rijksakademie.

After more than four decades of forced silence, some of the last surviving atomic soldiers share their unfathomable experiences of the atomic bomb tests in the 1950s.

Morgan Knibbe is a cinematographer and director based in Amsterdam, known for Those Who Feel the Fire Burning (2014), Shipwreck (2014) and A Twist in the Fabric of Space (2012).

Part-feminist linguistic investigation, part-child’s learning tool and celebration of motor sport, a voice-over of words and associations narrates 35mm verité footage of the Berwick Bandits, an all-male Speedway motorcycle team with the mantra ‘No Brakes, No Gears, No Fear’.

Born in 1975 in Suffern, New York, Margaret Salmon lives and works in Glasgow, Scotland. She creates filmic portraits that weave together poetry and ethnography. Focusing on individuals in their everyday activities, her films capture the minutiae of daily life and infuse them with gentle grandeur, touching upon universal human themes. Adapting techniques drawn from various cinematic movements, such as Cinema Vérité, the European Avant Garde and Italian Neo-Realism, Salmon’s orchestrations of sound and image introduce a formal abstraction into the tradition of realist film. Margaret Salmon won the first Max Mara Art Prize for Women in 2006. Her work was shown at the Venice Biennale in 2007 and the Berlin Biennale in 2010 and was featured in individual exhibitions at Witte de With in Rotterdam and White Chapel Gallery in London, among others. She recently presented a major survey of work, Circle, at Tramway, Glasgow in 2018.

Moyra Davey’s Wedding Loop (2017) sees the artist recounting a turbulent series of events at an operatic family gathering, while interspersing notes on auto-fiction, family portraiture, and the legacy of Julia Margaret Cameron alongside responses to writings by authors including Simone Weil, Elena Ferrante, and Karl Ove Knausgaard. While probing the lives and relations of such individuals the artist holds dearest (her five distinctive sisters, her post-adolescent son, her ensemble of cherished wordsmiths), the film draws a kind of coda to two of the artist’s earlier essay films, Hemlock Forest (2016) and Les Goddesses (2011), each of which organize around similar concerns relating to the dynamics of longing, loss, and artistic creation.

Moyra Davey is an artist based in New York, and whose work comprises the fields of photography, film, and writing. She has produced several works of film, most recently Wedding Loop (2017) as part of her contribution to documenta 14 in Athens. She is the author of numerous publications including Burn the Diaries and The Problem of Reading, and is the editor of Mother Reader: Essential Writings on Motherhood. Davey has been the subject of major solo exhibitions at institutions including Portikus, Frankfurt/Main (2017); Bergen Kunsthall, Norway (2016); Camden Arts Centre, London (2014); Kunsthalle Basel (2010); and Fogg Art Museum at Harvard University, Cambridge, MA (2008). Her work is found in major public collections, including the Museum of Modern Art and the Metropolitan Museum of Art in New York, and Tate Modern in London. She was awarded the Anonymous was a Woman Award in 2004.

Natasha marie Llorens is an independent curator and writer based in Marseille and New York. Her curatorial research is focused on the relationship between violence and representation in contemporary art from a feminist perspective. Recent curatorial projects include an exhibition on the structure of perception in contemporary painting at Hercules Art Studio Program in New York City and acting as lead resident for a month-long residency on ethical questions in social practice art and its curation at PRAKSIS in Oslo. Llorens is currently working on an exhibition at CUE Foundation in New York on the relationship between language and violence, and another at Tabakalera in San Sebastian on the political representation of the stranger. She teaches post-colonial curatorial practice in the MA program at Parsons Paris, holds an MA from the CCS at Bard College, and is currently a PhD candidate at Columbia University in art history.

Shama Khanna is an independent curator, writer and educator based in London. Since 2013 she has curated Flatness (flatness.eu), a multi-format research and commissioning project engaging in ideas around the screen-based image after the internet. She teaches at Kingston University and University of the Arts, London and co-edits the publication A-or- ist with 7 other writers. Recent articles have been published in NANG, Art Monthly and The White Review. She is a Trustee of not/no.w.here cooperative. To date, screening and discussion events relating to Flatness have taken place at international venues including Kurzfilmtage Oberhausen, Chisenhale Gallery and Auto Italia in London, Palais de Tokyo in Paris, Moderna Museet, Malmö, Western Front , Vancouver, Microscope, New York, Rupert, Vilnius, LUX Scotland, Glasgow
and warehouse, Berlin.