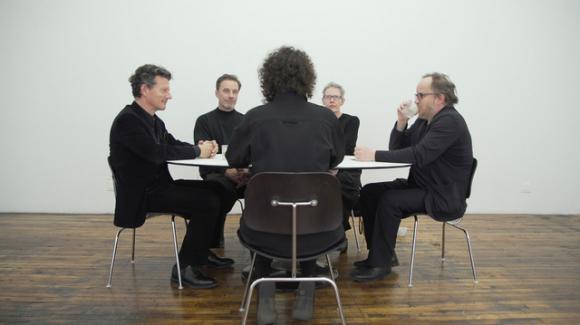 A camera infinitely moves in parallel to a table around which five people dressed in black are situated. It faces always the back of one; the director herself. Her initial monologue leads to a live discourse between the five shaping a manifestation of concerns and suggestions on resisting algorithmic governance.

LIMA  is pleased to invite you to the Dutch premiere of  Maria Lalou’s ‘The Dialogue’ at LAB111, followed by TALK, a scripted 2nd segment of  the  film’s premiere, organised together with Punt WG, in presence of Maria Lalou together with Alena Alexandrova, Rachael Rakes, Tao G. Vrhovec Sambolec and Theus Zwakhals. The evening will present different formats of a discussion on the relation between the viewer, the subject, and the camera.

As Rachael Rakes refers in her introduction in Lalou’s book ‘the camera’: ’The Dialogue’ and ‘the camera’ are parts of a constellation of projects by Lalou that investigate visual technologies. The method of the  work maintains a pre-active stance on the relation between people and images, cameras and people, and images and images. By  de-emphasising her own directorial or authorial mode in ‘the Dialogue’, placing instead a concept of authoring or perceiving machine, and then unmasking this formation in ‘the camera’, these works propose the apparatus relations happening already, and pre-ceives those to come.”

the camera by Maria Lalou, published by DOLCE in edition 500

The Dialogue
film by Maria Lalou (2018-19, duration 90’)
How can an image be infinite? How can we move around in the mirror cabinet? With references to how our image production, circulation of information and virtual presence is all on the hands of algorithmic governance, a live evolvement of thoughts is recorded in one long shot. In the film ‘The Dialogue’ by Maria Lalou we experience a moderated discourse yet not pre-scripted, based on Gorgias of Plato. Accumulating in the instance, a camera is infinitely moving parallel to a staged table. The director is on play herself, yet as a ‘distant entity’, the one questioning and steering the discussion, placing her own statement via the initial question on the table.

TALK
a directed 2nd segment of film’s premiere by Maria Lalou and hosted by LΙΜΑ, Punt-WG and LAB111
A scored analysis initiated by Lalou looks at our dislocated cinematic reality governed by algorithms in collaboration with; Rachael Rakes : on the relation of between image production and its significance in film/video works in art T.G.V. Sambolec : underlying the idea of presence in the role of the artist and its relation to the art institution T. Zwakhals : on how do institutions archive time based images and negotiating their presence in the network discourse Alena Alexandrova : cognitive theorem of the situation responding to the various formats of discussion

Maria Lalou is a contemporary conceptual artist and filmmaker. She explores the topic of ‘viewing’, incorporating cinematic apparatus and surveillance as part of her tools, with central references to ‘the political of the viewer’. Her work manifests throughout large-scale installations, performances, films and publications. After years being active in the visual arts with her clear interest in activating the role of the artist as a worker in the arts while deconstructing the role of the cultural institution, Lalou makes her first attempt to deliver a statement through a feature film by the document of a discursive dialogue on the image production, its role in contemporary times and its relation to cinematic time; by staging and recording a real time dialogue between herself and four scholars, with ground the speculative society in New York. Lalou’s works have been shown internationally at Greek Film Archive, Athens; Printed Matter, New York; Arti et Amicitiae, Amsterdam; Onomatopee, Eindhoven; amongst others. She has presented her work at the School of Architecture of Princeton University; the Department of Architecture of ETH, Zurich; Aalto University of Helsinki, Finland; Rijksacademie Studios, Amsterdam; Cittadellarte-Fondazione Pistoletto, Biella; and Università IUAV di Venezia, Venice, amongst others. She has contributed to the peer review journal activate, Roehampton University, London, as well as to Leonardo, MIT Press Journals. In 2012 she initiated the [UN]FINISHED archival project in Athens together with Danish architect Skafte Aymo-Boot. Lalou shares her time between Amsterdam and Athens.

Rachael Rakes is a curator, arts writer, editor, film programmer, and educator. Rakes researches tools of ethnographic refusal and forms of radical abstraction and coding in art and everyday life. She is currently Curator of Public Practice at BAK basis voor actuele kunst, an Editor at Large for Verso Books, and a Programmer at Large for the Film Society of Lincoln Center.. Until 2019, she was the Head Curator and Manager of the Curatorial Programme at De Appel in Amsterdam. Rakes is co-editor of the publication Practice Space (2019, NAME/De Appel) and recently contributed criticism and essays to Art-Agenda, Artforum, and The Village Voice, among other publications and catalogues. Recent exhibitions and programmes include DECODERS/RECORDERS: Steffani Jemison and Samson Young (De Appel/Looiersgracht 60, Amsterdam), Relational Capacities (Frame Contemporary /Amos Rex, Helsinki), On Watching Men (SAIC, Chicago), Dark Progress + Uncontained Energy and Contained Fear (Tabakerlara, San Sebastian), CAMP: In Cameras Res (De Appel), TheHealth Show II (A.I.R., NYC), In Between: Tacita Dean (Centre Pompidou, Paris), EVAN IFEKOYA: A Score, A Groove, A Phantom, A Congregation (De Appel), and On Documentary Abstraction (Oolite Arts (Miami).

Tao G. Vrhovec Sambolec / Punt WG is Amsterdam-based artist with a particular focus in sound, new media, real-time interaction, and questions of contemporary mediation in relation to the sense of (bodily) presence. His works encompass interdisciplinary and mixed media installations, sound interventions and electro acoustic music. He earned a PhD in Artistic Research from Faculty Fine Art at Bergen’s University In Norway. In 2017 he took part in Research Pavillion at the 57th Venice Biennale. In 2010 his work was awarded at Arts Electronica Festival in Linz Austria. He is a member of the artistic committee of puntWG project space, a platform for the arts located on the premises of the former hospital Wilhelmina Gasthuis in Amsterdam West, which now hosts 120 artists’ studios, and a member of artistic committee of DNK - Amsterdam, a series of experimental contemporary music and sound art concerts, events, lectures and exhibitions.

Theus Zwakhals / LIMA  lives and works in Amsterdam. He works for the distribution and collection department of LIMA Amsterdam since 2013 and from 2002 to 2012 at the Netherlands Media Art Institute (NIMk). He is a member of the IFFR Short Film selection committee and its sound//vision programme since 2009. Next to that, he is a programmer for Rumor, a series of adventurous music programmes in Utrecht. He studied Cultural History at Utrecht University. From 1994 to 2000 he was producer of Impakt Festival in Utrecht.

Alena Alexandrova is a cultural theorist and an independent curator based in Amsterdam. She lectures at the Fine Arts and Photography departments, Gerrit Rietveld Academy, Amsterdam. She holds a PhD from the University of Amsterdam. Currently she is writing a book Anarchic Infrastructures. She is the author of Breaking Resemblance (Fordham University Press, 2017) and has published internationally in the fields of aesthetics, performance and visual studies, and regularly contributes to art publications and catalogues. She has curated exhibitions around the conceptual figure of anarcheology. Previously she taught  at the Master of Fine Arts, Faculty of Fine Art, Music and Design, University of Bergen, Norway and  the Dutch Art Institute, Arnhem. She was a visiting researcher at the Humanities Center, Johns Hopkins University, Atelier Holsboer, Cité des Arts, Paris, and a guest lecturer at the Academy of Fine Arts in Nuremberg.