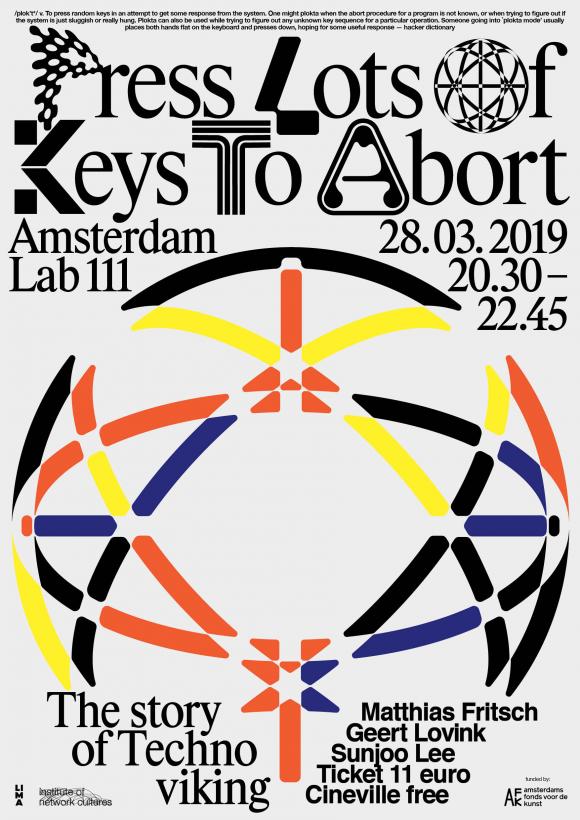 The Story of Technoviking.
Thursday March 28, 20.00 - 22.30
LIMA, Arie Biemondstraat 111, Amsterdam
Press Lots of Keys to Abort in collaboration with The Institute of Networked Cultures and LIMA
Entrance: € 11,- euro / free with Cineville
Language: English

Expect a varied program that includes the introduction of Press Lots of Keys to Abort, a short film about microwaves, popcorn, the film 20Hz (2011) by Semiconductor from the collection of LIMA and unlimited free WiFi.

Semiconductor, 20Hz, 2011
The work of the British artist pair Semiconductor (Ruth Jarman and Joe Gerhardt) reflects their enormous fascination with science. Using data which they themselves collect from existing archives, they are able to visualize complex and imperceptible phenomena in digital animations. ’20 HZ’ visualizes the course of an electromagnetic storm in the earth's outermost atmospheric layer. Data from CARISMA (Canadian Array for Real Time Investigations of Magnetic Activity), recorded at a frequency of 20 HZ, are the basis for this video. Jarman and Gerhardt interpreted the data as sound and used it to generate the image. The result is a digital black and white animation with ever-changing organic forms. The abstract sculptural patterns remind one of cloud banks, unil they change into rain drops and other figures. Meanwhile the audio track crackles, we hear the sounds of stormy weather and the wind. With ‘20 HZ’ Semiconductor investigate the friction between the natural and the artificial, and interrogate our experience of such invisible phenomena.

Matthias Fritsch, The Story of Technoviking, 2015
‘The Story of Technoviking’ (2015) tells how an anonymous dancer in a street rave unintentionally became one of the first and most famous internet memes. Originally captured and uploaded as part of an art project, well over a year later, the video and the anonymous dancer, after countless manipulations by a massive group of internet users, became an internet sensation with a new title: Technoviking. Through interviews with a variety of experts from the world of digital media and law, 'The Story of Technoviking' examines why a piece of online content was so attractive to the online community. And how uploading a video unintentionally resulted in fame, debts and a lawsuit.
PLOKTA invites Matthias Fritsch (DE), the maker of the original Technoviking video and documentary, to Amsterdam.

On March 28, Matthias Fritsch will have a conversation with media theorist Geert Lovink, who is currently studying the meme for his soon to be released book 'Sad by Design'. Together they will shed a contemporary light on the classic viking meme.

PLOKTA is a New initiative in Amsterdam, that unravels society and technology by looking through the eye of film.

PLOKTA collaborates with The Institute of Networked Cultures and LIMA. The evening is funded by The Amsterdam Fund for The Arts (AFK)