Talking Back To The Media 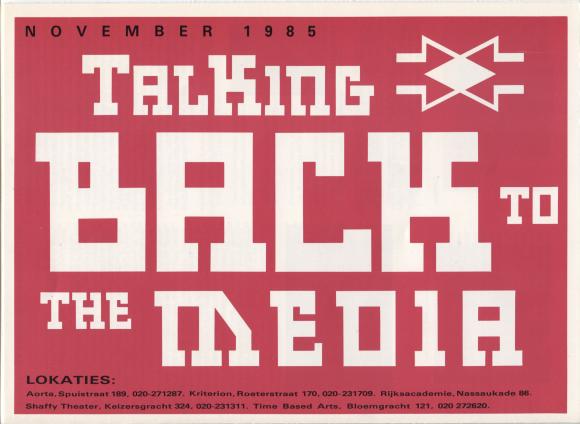 In september 2013 LIMA and de Appel Arts Centre started with the archiving and conservation of the '85 manifest Talking Back to the Media.

Talking Back to the Media was a concept by David Garcia and Raul Marroquin and took place in Amsterdam in november 1985. The aim of Talking Back tot the Media was to show work by artists who were making use of one of the mass media and who attempted to deconstruct the 'reality' evoked by the mass media or commented on that media in some other way in their work. TBTTM consisted out of numerous events as a photography-exposition, artist-conservations, a theater-play, a film festival, a publication, and local television broadcasts.

To research this manifestation de Appel and LIMA assigned two interns, Brigitte Bélanger and Camie Karstanje. In the past weeks they have been mapping out the material that they've found in the archives of LIMA and de Appel. Material that illustrates the sense of time in which the manifestation took place and the effect the mass media had on people those days.

After reading and seeing the material their assumptions on the relevancy of the theme of the manifestation was strengthened. The influence of the mass media only increased since the 80's and all of the concerns of the initiators and artists are concerns we have nowadays. The complexity of the 'reality' that the media shapes got only bigger by the diversity of sources and the interactivity and power of the social media.

On this blog we will show our findings in this research. We will show the material we have found in the archives as well as the progress in our goal to give the manifestation a context in this time by researching the development of the phenomena in the past two decades. We will write about the ideas of the involved artist and about the techniques and concept the artist worked with. But we will also ask the involved artist and initiators about the development of their opinions on this subject and the influence of the media on them these days. All in all we hope to be able to shine some light on the reality that the mass media has been, is now and will be.

More information on Talking Back to the Media