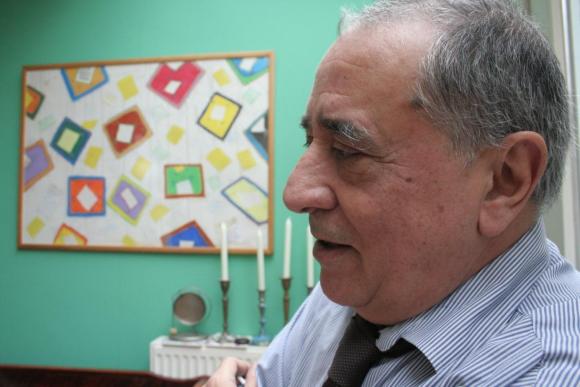 In the context of our research on Talking Back to the Media, we - Camie and Brigitte - visited Raul Marroquin in his house in Amsterdam. In turned out to be fragmented talk, with an enthusiastic but messy Raul – who managed to talk, show archival material, prepare lunch and smoke herbal cigarettes at the same time.

Raul Marroquin: 'I must confess I don't remember many things from 1985. When you called me I looked back in the magazine from TBTTM which I didn't see for twenty years. And then I remembered a lot of the names. I didn't realise there is gold here! A lot of assets of people that are now dead or very important, and I think that’s very interesting. One is now more famous than the other (he points at the names in the magazine). And nowadays 80% of the galleries have video art one way or the other.

The project was originally called Artists Talking Back to the Media, but I went away for work and when I came back the name was changed into Talking Back to the Media. Only for design reasons! Because it looked better typographically!' Raul gives us this as an example of how things went in 1985 according to him and concludes: 'today everybody is talking back to the media!'

RM: 'Back then it was a much more compact situation, you had de Appel, and de Appel was the centre of art in the world! I don't know how it is now, I haven't been there in years. Eric Bogosian who did a performance at the opening, was at his peak at that moment (1985). I don't know how he came to the project, because he was very expensive.

I’m not much into going back into the past, I respect and am behind my past. I get at least once a month proposals from young curators for art works from thirty years ago even! There are pieces that I really start hating now. Like “World First TV Convention”, that’s from 1979, an installation with 250 televisions, talking to each other about computers. There were no computers back then so I don't want to do that again, and I don't have time for it. Gallerists are different kind of people, they don't like my TV show. They don't like TV at all, but they think my show is like boulevard you know (RTL Boulevard). They are only interested in selling and protecting an image. (his work is represented by a lot of galleries: over twenty worldwide) Slowly they are more interested in what I’m doing live, sometimes I want to work with new media, like skype. Now in Miami I’m going to do a lot with Facetime and I did a lot with WhatsApp.

It would be great if we can do something now that is called: Artists talking back to the media, because that's totally different from Talking back to the media! Did Salto already exist at that point? I think it was called Kabeltelevisie Amsterdam back then. There was no infrastructure then, and that makes a hell of a difference.

David and I went to the Shaffy, I remember perfectly the first night, we were talking to Aart van Barneveld, he was from Time Based Arts, he was the young boyfriend of Ulises Carrión. Actually TBA was initiated by de Apple, to get rid of all these video artists. There was an explosion of video artists in that time!

Aart became the director of TBA. He did all the building. We really wanted to have a film festival, a publication, a television production, that was very important for us; we needed a way to distribute our work! Because the galleries didn’t have video, video was very expensive back then. For us, it was very important to penetrate television. Penetration of all platforms you can use. Actually from TBTTM television came TBA television and from that came the Hoeksteen TV.

During the lunch we talk about his beautiful house. The conversation becomes more and more messy … Camie Karstanje: Why did you use all these forms: posters, TV, radio etc.?

Raul: 'The posters were also a part of the vocabulary….'

Raul's phone rings, and we stop for a while.

RM: 'In 1978 I met David and Annie Wright when they were in Holland for Nan Hoover. We got connected, David and I made a proposal for TBA, and TBA took over from there. We became part of the team, we choose the team. The team selected all the artists.

Three video productions were especially made for the project: the first is General Idea's Test Tube, the second is Richard Gardena… Richard and me started with video art. Things were financed back then by CRM, Amsterdam, Prins Bernard Fund. Aart arranged most of that. Sabrina was more like a manager, she would harass you with stuff.

It was a manifestation with international audience. I think Saskia Bos played an important role in that. There was no internet back then, of course. I don't remember anything about public reactions or media reactions. But it had a great effect on us. It changed a lot. Until then things had been very ad hoc, this changed after the manifestation.

Here in Holland nothing happens. I’m happy I live half of the time outside of Holland. I live from the sales of my work now, and lectures that kind of things.'

Raul tells us about his daughter, who made clothes for Marina Abramovic. Raul begins again: 'When I did Alienation…. And then we have to stop recording again. The last he tells us: I’m a total idiot with technology, I rely 100% on younger people for that.'

Text and photos by Brigitte Bélanger