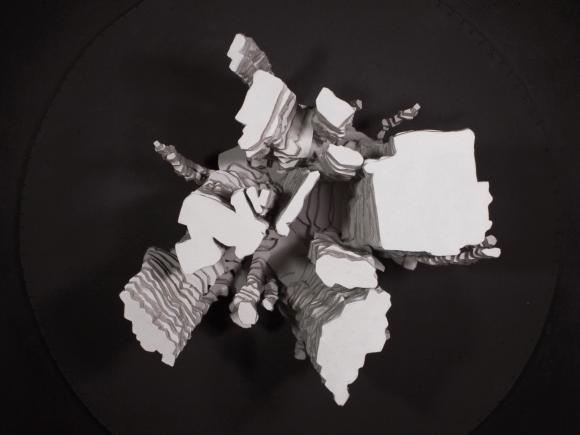 Johan Rijpma (1984) is one of the new young artists whose work has recently been added to the LIMA collection. Rijpma earned his Master's degree at the HKU, direction Image and media technology.

In his process-oriented films, animations and music videos, Rijpma proceeds as a sculptor. Fascinated by artistic processes like unpredictability, he creates complex images out of simple actions, with very playful work as a result. In Division (2012) the repeatedly manually tearing of a piece of paper forms the basis of a rhythmically and visually stimulating work. It has won several awards, including the Barbara Aronofsky Latham Award in 2014.

In Descent (2014) the deconstruction of a physical object is also the starting point of an ingenious reconstruction in moving image. A ceramic cylinder-shaped mug falls on the ground, and shatters into pieces. The shards are carefully copied by Rijpma. many times. The form of the broken mug is built up layer by layer into a new three-dimensional object. The breaking of the old object contributes to the creation of the new one. An exciting and layered form game. Decent received an Honorary Mention at Ars Electronica in 2015.

Watch Division, Descent, and other works of Johan Rijpma in our online catalogue.