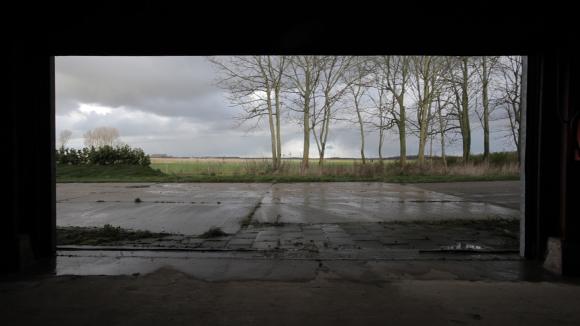 Astrid van Nimwegen graduated from the Piet Zwart Institute in Rotterdam in 2013. Her work provides a stylised and almost meditative look at the (Dutch) landscape. Many of her films - video recordings, as she calls them - are composed of long static shots of nature. Thereby it is not so much the environment itself, but more the cinematographic and aesthetic vision of the portrayed landscape that is central. A Vertical Slice of Landscape for example, provides a more than two minutes long look at a landscape. Seen through vertical opening between two garage doors, a visually and sonically strong natural spectacle unfolds.

The Garagedoor series is characterised by the same principle. Each video in the series follows the same structure: a garage door opens, followed by an uninterrupted view of about two minutes on the environment that is behind it. The garage door becomes like a heavy theatre curtain that opens to give a glance on a stage. When the play has ended, the curtain closes again. Michel Foucault talked about the existence of certain interspaces; actual rooms where different rules than the daily reality apply, areas where other structures of time and place are at work. He called this heterotopias. Garagedoor reminds of this undefined interspaces: from a dark (cinema) room the audience looks at a landscape that is turned into theatre, both spaces located in between reality and fantasy. While watching the work of Van Nimwegen, the space of the viewer becomes a heterotopia from which he looks at a heterotopia.

In the case of this series of works, there is even more going on, because the artist also places emphasis on seriality. Differences between the individual works become visible through the principle of repetition: a landscape, even when viewed from the same point of view, is never the same. Different seasons, climates and actors make each work in the series a unique one. Astrid van Nimwegen shows the versatility of both the medium she uses and the Dutch landscape.

On the right you can see the complete list of works that have recently been added to our collection.
You can watch these works in our online catalogue. For more information about the works, and the display and rental conditions, please contact theuszwakhals@li-ma.nl